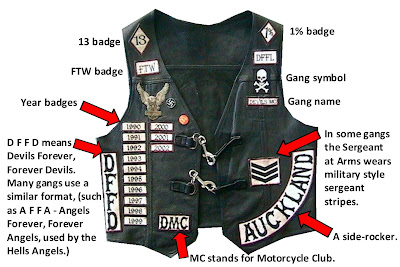 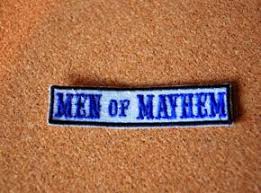 Pengertian Lainnya:
1%er = The term was first used in the 60â€

s to describe some of the people that attended the motorcycle events back then. The American Motorcycle Association stated that 99% of the people at their events were god fearing and family oriented. The other 1% were hard riding, hard partying, non-mainstream type people.
Ape Hangers = High handlebars so Biker's hands are at or above their shoulder height
Backyard = Where you ride often, your territory
Baffle = Sound deadening material that sits inside a muffler and quiets the exhaust note
Blockhead = The V-twin engine Harley produced 1984 -2000
Boneyard = Salvage yard for used bikes & parts
Brain Bucket = Small, beanie-style helmet
Broad = A female member at the club. She may be an old lady, dancer, waitress or at times a prostitute.
Broken Wings = a patch meaning the rider has been in a crash.
Burnout = Spinning the rear wheel while holding the front brake.
Cage = Automobile, Truck, Van... Anything that's not a motorcycle.
Cager = Automobile Driver
Chopper = Bike with the front end raked out or extended out.
Church/Chapel = A room in a Clubhouse specifically for meetings and voting
Clone = A motorcycle built to resemble and function like a Harley-Davidson motorcycle without actually being a Harley-Davidson motorcycle
Colors = M/C Back-patch
Crash Bar = Engine Guard
Crotch Rocket = Sport bike (Eg: FCR's, PCJ's)
Custom = Custom built bike
Cut = Vest with Club Colors
DILLIGAF = Patch meaning "Do I Look Like I Give A Fuck?"
Drag Bars = Low, flat, straight handlebars
Evo / Evolution = The Evolution engine (V-Twin, produced from 1984 to 2000)
Fathead = The Twin-Cam engine (V-Twin, produced from 1999 to Current Day)
Fender = A female passenger who is not an Old Lady but simply a lady a biker has invited for a ride.
Flathead = The Flathead engine (V-Twin, produced from 1929 to 1972)
Flash Patch = Generic patches usually sold at swap meets and shops. (Sons use many politically incorrect Flash Patches)
Flying Low = Speeding
FTW - Fuck The World or to some, Forever Two Wheels
Hard Tail = A motorcycle frame with no rear suspension
Independent = Someone not a part of any club or group, but normally a part of the biker culture.
Ink = Tattoo
Ink-Slinger = Tattoo Artist
Knuck / Knucklehead = The Knucklehead engine (V-Twin, produced from 1936 ? 1947)
Leaving Your Mark = Oil puddle on the ground where you parked your bike
MC = Motorcycle Club
OEM = Original Equipment Manufacturer (Commonly referred to as Stock)
Ol' Lady = A woman declared by a club member to be 'theirs'. Usually done for girlfriends and wives to prevent members hitting on another members woman.
Pan / Panhead = The Panhead engine (V-Twin, produced from 1948 ? 1965)
Pillion Pad = The passenger seat
Pipes = Exhaust System
Plugs = Spark Plugs
Pucker Factor = Refers to how tight your ass got on a close call
RC = Riding Club
Rags = Also used to refer to Cut or Colors. In some areas it's used only when referring to a woman's colors.
Rat Bike - Usually an older bike that doesn't look like it's been taken care of at all.
Revolution = The Revolution engine, Harley-Davidson's first water-cooled engine (V-Twin, produced from 2002 ? Current Day)
RICO = (Racketeer Influenced and Corrupt Organizations) Laws passed for Law Enforcement to combat organized crime such as the mafia that are also used against some MC's
Ridin' Bitch = Riding as Passenger
Road Name = Also known as handle. Name given to to someone by his Brothers/ friends. Usually given after some kind of incident or something they would associate with that person.
Rocker = Part of M/C colors which usually designates geographic location or territory
RUB = Rich Urban Biker
Rubber = Tire
Rubber Side Down = Ride Safe; Don't Lay the Bike Down
Run = Road trip with your Buds, most of the time with a place to go to in mind
Scoot = Motorcycle
Shiny Side Up = Ride Safe; Don't Lay the Bike Down
Shower Head = Refers to the new Harley-Davidson V-Rod motorcycle motor. Itâ€

s right side.
Shovel / Shovelhead = The Shovelhead engine (V-Twin, produced from 1966 ? 1984)
Sissy Bar = Passenger Backrest
#.F.F.#. (#, Forever, Forever # (Eg: Mongols MC. MFFM, Mongols Forever, Forever Mongols) = Patch worn by Club members to represent their total commitment to the club and every other member of that club.
Slab = Interstate
Sled = Motorcycle
Softail = A motorcycle frame whose suspension is hidden, making it resemble a hard tail
Straight Pipes = An exhaust system with no Baffles
Tats = Tattoos
Tail Gunner = The last rider in a group
Thirteen "13" = Common patch worn by "Outlaw" bikers. Can have several meanings. The most common held meaning is it's being the 13th letter of the alphabet "M" and stands for Marijuana or Meth. In the "Ese"/ Mexican community "13" is often used to represent the "South Side" and "La Eme" (Mexican Mafia).
Turn your back = To completely disassociate from a person or club.
Twisties = Section of road with a lot of turns
Wannabe = Refers to someone that tries to pretend to be a part of the biker lifestyle
Wrench = Mechanic 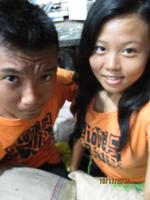